Dress Journalist Julie De Bona On Set 50 inside of "TF1" with Nikos Aliagas . 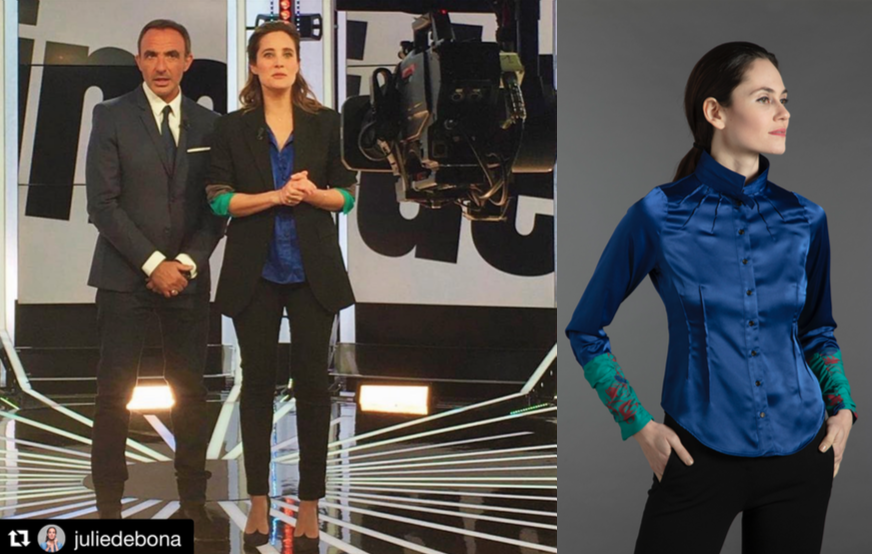 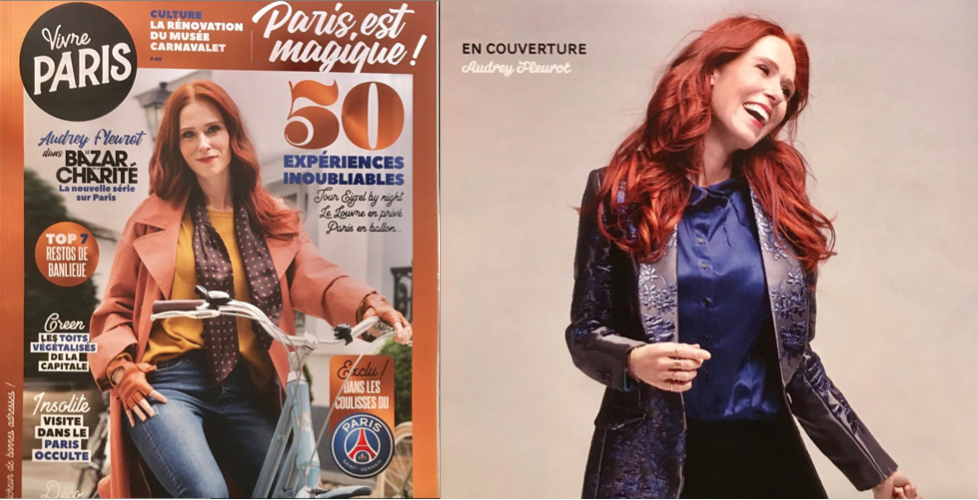 What a beautiful moment when a customer comes to see us at the boutique: "I discovered you thanks to the article in Marie Claire!"

You too can visit us in our dreamy cocoon at 1bis Rue de la Chaise, metro Sèvre-Babylone! 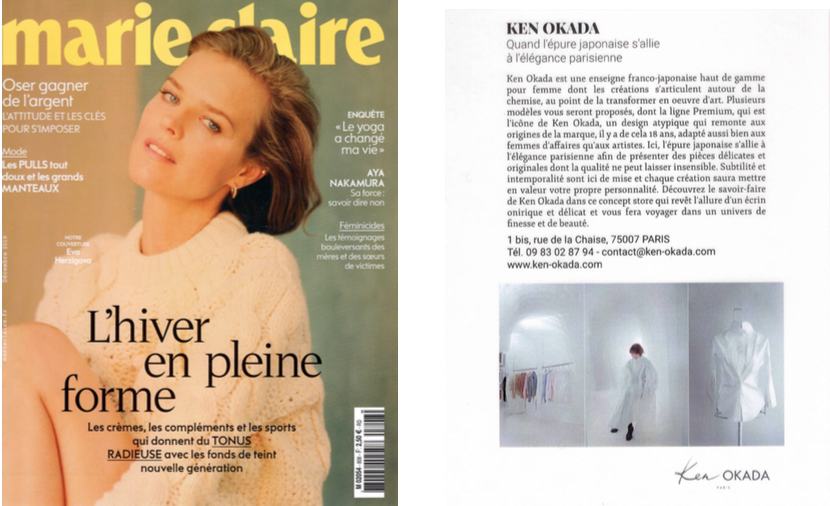 In September 2018, Tatiana Haen published "The Power Dressing," and collaborated with Ken Okada with the goal of guiding the leading and ambitious woman in her quest to look the part of her personality.

And it's December 2018, Ken Okada appears in the famous magazine Gala! On the subject: the asymmetry "stylistic technique to have style without going too far outside the established codes"

KEN OKADA business shirts for an independent and ambitious woman 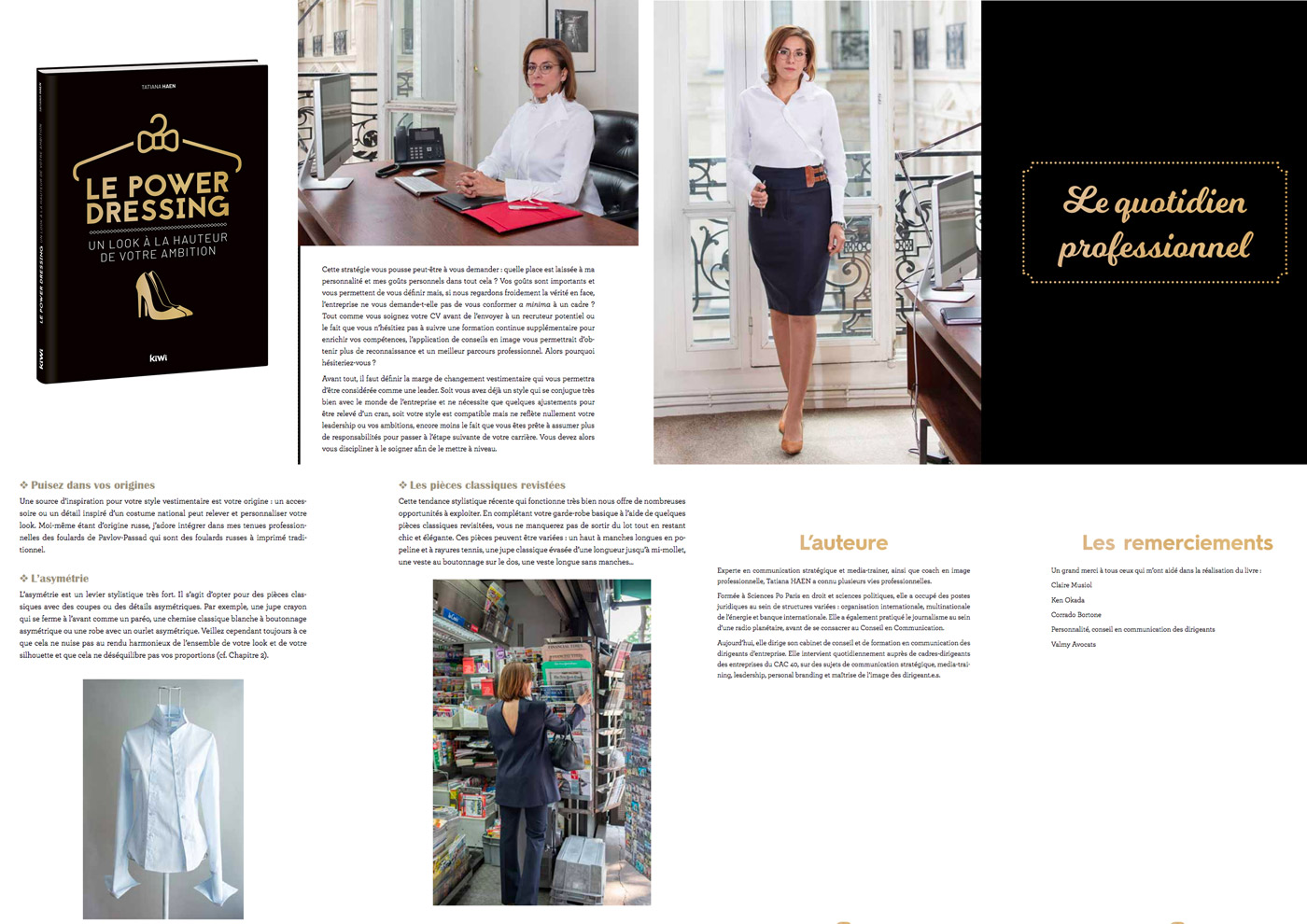 The Ken Okada Paris brand is featured in The Forest magazine for composing women's looks through unique shirts.

In February 2018, Ken Okada appears in a Figaro article about the concept store BENUDE.

A meeting place for artists and creators in the heart of Paris. In an article in the Portraits section by Mr. Vignon following the launch of the spring/summer 2018 collection, Ken Okada is described as a talented Japanese designer. The name Le fil des anges refers to the purity and delicacy of Ken Okada's designs and boutique.

Ken Okada appears in January 2018 on the premium Slow-oriented site FineLife.TV. A video and article about his SS2018 collection. Following his runway show on his SS2018 collection at the W hotel in Paris, Ken Okada appears in an article on Stars Media. Appearance in a Japanese online magazine for the SS18 collection. The fashion show of the SS18 collection at the W Hotel did not leave the press indifferent, which now describes Ken Okada as "the most Parisian of Japanese designers"

The Ken Okada shirt worn on the set of Télématin by Marie Mamgioglou,

The Japanese designer at the Designer Christmas Trees, November 2015

Repetto shoes Ken Okada for his show at the "Rendez-Vous Toyota", Fashion week 2013

A designer with a unique and Japanese universe, September 2013

The costumes created by Ken Okada for the dancers of the Paris Opera, 2012.

The unique architecture of the Ken Okada concept store, No. 12 September/October

A shirt in tribute to the Japanese tsunami and nuclear disaster, 2012

The shine on the shirts KEN OKADA PARIS, February/ March2012

"Dreamlike in Paris" Ken Okada joined forces with the Lutetia Hotel to offer a unique service to guests staying in 5 of the hotel's most emblematic Suites. In each of these Suites, a silk Ken Okada "over/under" outfit that can be worn day or night, transparent, delicate and feminine, was offered to the clients. A collaboration placed under the sign of luxury thanks to a tailor-made and innovative service.